Celebrating The Power Of Prep 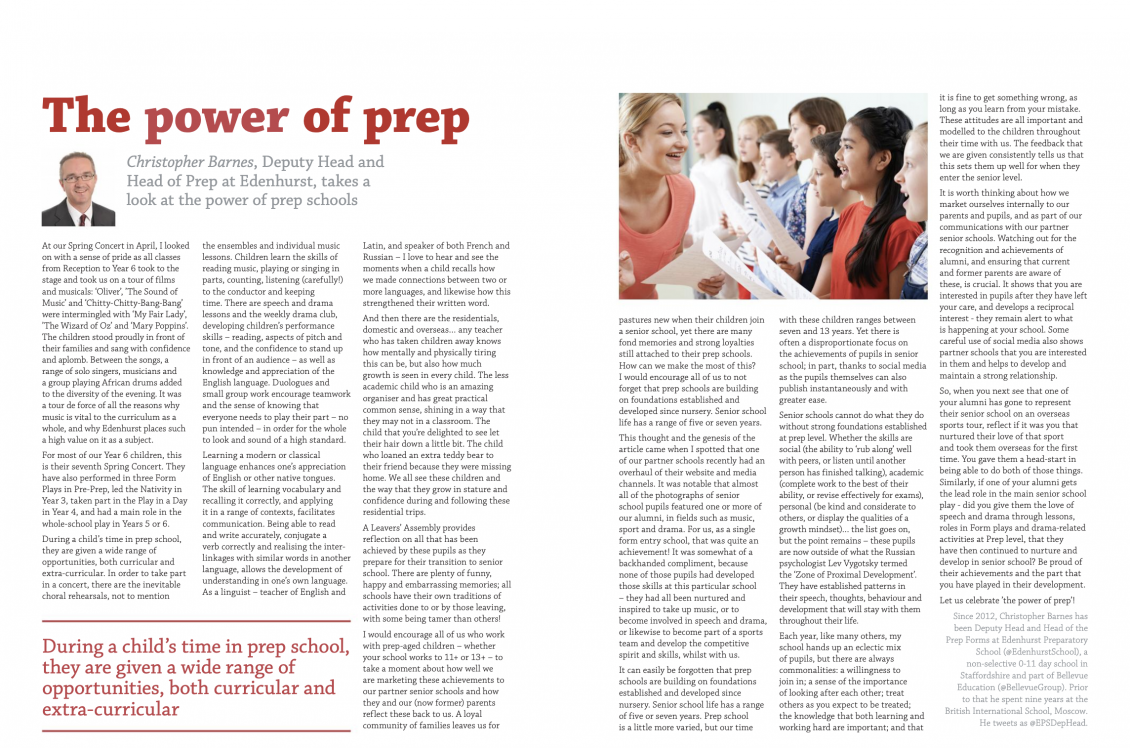 This is an excerpt from Mr Barnes’s article that features in the Summer 2019 edition of ‘Prep School Magazine’, celebrating all things great about prep school life!  He’s writing another one for the Autumn edition and we’ll feature it later in the year…

Last night at our Spring Concert, I looked on with a sense of pride as all classes from Reception to Year 6 took to the stage and took us on a tour of films and musicals:  ‘Oliver’, ’The Sound of Music’ and ‘Chitty-Chitty-Bang-Bang’ were intermingled with ‘My Fair Lady’, ’The Wizard of Oz’ and ‘Mary Poppins’.  From youngest to oldest, the children stood proudly in front of their families and sang with confidence and aplomb.  Between the songs, a range of solo singers, musicians and a group playing African drums added to the diversity of the evening.  It was a tour de force of all the reasons why music is vital to the curriculum as a whole, and why Edenhurst places such a high value on it as a subject.

For most of our Year 6 children, this is their seventh Spring Concert.  In addition to that, they will have performed in three Form Plays in the Pre-Prep classes; led the Nativity in Year 3; taken part in the Play in a Day in Year 4; and had a main role in the whole-school play in Years 5 or 6.

During a child’s time in Prep school, they will be given a wide range of opportunities, both curricular and extra-curricular.  In order to take part in a concert, there are the inevitable choral rehearsals, not to mention the ensembles and individual music lessons.  Children learn the skills of reading music, playing or singing in parts, counting, listening (carefully!) to the conductor and keeping time.  There are Speech and Drama lessons and the weekly Drama club, developing children’s performance skills – reading, aspects of pitch and tone, and the confidence to stand up in front of an audience – as well as their knowledge and appreciation of the English language.  Duologues and small group work here encourage team work and the sense of knowing that everyone needs to play their part – no pun intended! – in order for the whole to look and sound of a high standard.

Learning a modern or classical language enhances one’s appreciation of English or other native tongue.  The skill of learning vocabulary and recalling it correctly, and applying it in a range of contexts, facilitates communication.  Being able to read and write accurately, conjugate a verb correctly and realise how it links with similar words in another language, allows the development of understanding in one’s own language.  As a linguist – teacher of English and Latin, and speaker of both French and Russian – I love to hear and see the moments when a child recalls how we made links between two or more languages, and likewise how it has strengthened their written word.

And then there are the residential, both domestic and overseas…any teacher who has taken children away for any length of time knows how mentally and physically tiring it is, but also how much growth is seen in each and every child.  The less academic child who is an amazing organiser and has great practical common sense, shining in a way that they may not in a classroom.  The child that you’re delighted to see let their hair down a little bit.  The child who loaned an extra teddy bear to their friend because they were missing home.  We all see these children and the way that they grow in stature and confidence, both during and following these residential trips.

A Leavers’ Assembly is a good time to reflect on all that has been achieved by these pupils as they prepare for their transition to senior school.  There are, invariably, plenty of funny, happy and embarrassing memories; all schools have their own traditions of activities done to or by those leaving, with some being more tame than others!

It can easily be forgotten that Prep schools are building on foundations established and developed since Nursery.  Senior school life has a range of five or seven years.  Prep school is a little more varied, but our time with these children ranges somewhere between seven and thirteen years.  Yet there is often a disproportionate focus on the achievements of pupils in senior school, in part thanks to social media as the pupils themselves can also publish instantaneously and with greater ease.

Senior schools cannot do what they do without strong foundations established at Prep level.   Whether the skills are social (the ability to ‘rub along’ well with peers, or listen until another person has finished talking), academic (complete work to the best of their ability, or revise effectively for exams), personal (be kind and considerate to others, or display the qualities of a growth mindset)…the list goes on, but the point remains: senior school pupils are outside of what the Russian psychologist Lev Vygotsky termed the Zone of Proximal Development.  They have established patterns in their speech, thoughts, behaviour and development that will stay with them throughout their life.  Each year, like many schools, my school hands up an eclectic mix of pupils, but there are always commonalities: a willingness to join in; a sense of looking after each other; treat others as you expect to be treated; the knowledge that both learning and working hard are important; and that it is fine to get something wrong, as long as you learn from your mistake.  These attitudes are all important and modelled to the children throughout their time with us.  The feedback that we are given consistently tells us that this sets them up well for when they enter senior level.

So, next time you see a post on social media or a school magazine about one of your alumni going to represent their senior school on an overseas sports tour, reflect if it was you that nurtured their love of that sport and took them overseas for the first time.  You gave them a head-start in being able to do both of those things.  Similarly, if one of your alumni gets the lead role in the main senior school play – did you give them the love of speech and drama through lessons, as well as roles in Form plays and drama-related activities at Prep level, that they have then continued to nurture and develop in senior school?  Be proud of their achievements

Let us all celebrate ’the power of Prep’!