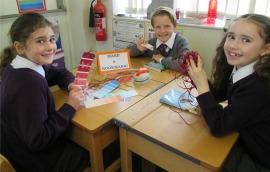 We took a sidestep on World Book Day this year and didn’t ask the children to come in costumes.  The reason was straightforward – we wanted to focus on the love of books and reading, rather than on who they would dress up as.  Interestingly, the ‘costume’ element was 7/10 on the official World Book Day website: showing that this is not regarded as being a key part of the day!

The children certainly took to their ‘different’ World Book Day and enjoyed what they did.  It has been good to hear from a number of the Prep Form pupils that they have already been and ‘spent’ their Book Vouchers on the free books – remember that you have until 26th March in order to claim them, from branches of Waterstones or WH Smith.

Prep 3:
Prep 3 had great fun on World Book Day!  Already avid readers, they brought in a favourite book and enjoyed sharing it with the rest of the class.  They now have plenty of ideas about what to read next!  Another activity they took part in was making a bookmark – learning to take care of their books is very important!  They followed instructions from the whiteboard to make a ‘rocket’ or made one of their own design.  However, the best fun was had through using the Harry Potter name generator!  Any idea who these ‘characters’ are – Ted Whitby, Crookshanks Karkaroff, Hassan Hopkirk and Lavender Abbott? (Hint: the initials may help you to guess!)  Why not try it for yourself – it may inspire you to write the next bestseller!

Prep 6:
Interspersed with creating, editing and writing up their entries for the Bellevue Writing and ISA Horsey Junior Writing Competitions, Prep 6 also enjoyed being creative with a range of book related activities linked to World Book Day.  The children had a challenge pack with a range of activities, and they chose to complete some from each level.  These were straightforward, such as making bookmarks; brainteasers (e.g. creating wordsearches linked to favourite book characters and authors so that friends can try them out); artistic (designing an alternative cover for their favourite book); and also creative/collaborative (making an ‘Incredibook’ – this is a creative book where one child writes the first page, then passes it on to a peer who writes the second page: they then pass it on to another pupil who writes the next page, and so on.  Great fun was had by all as they either tried to keep to the genre or diversified considerably!)

Prep 6 also enjoyed going to read with their Reception Buddies on Friday afternoon – each reading to the other.  Some of the older children brought in some of their favourite stories to share with the younger ones.

Mr. Barnes also let slip his guilty secret about writing…that he loves doing it, and that if he wasn’t a teacher then he would love to write full-time instead!  Perhaps he even has a book published already: who knows…?

Click here to see some photographs from World Book Day!