Take One Picture – An New Venture For Edenhurst 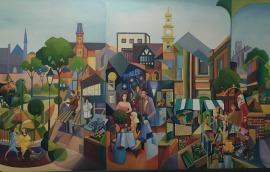 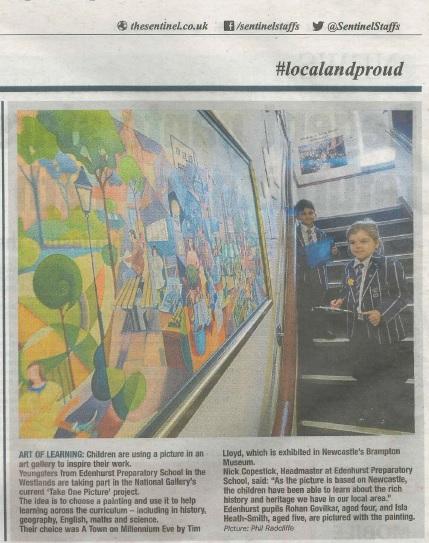 The National Gallery in London has run a project entitled ‘Take One Picture’ for a number of years.  It is a countrywide scheme for schools, the idea of which is to focus on one painting from the Gallery’s collection to inspire cross-curricular work for children aged 11 and younger.  The challenge is then for schools to use the image imaginatively in the classroom, not just as a stimulus for artwork but also in a range of curriculum areas.

The project has various aims, all of which are in line with what we are trying to promote at Edenhurst.

We decided that we would get involved at Edenhurst this year and two weeks ago, Mr. Copestick and Mrs. Twigge took representatives from the School Council to the Potteries Museum in Hanley and then to the Brampton Museum here in Newcastle.  Their brief was simple: to select a total of three pictures that could be used for such a project.  It had to be a picture that not only interested them but would also interest children in other year groups.

After considered debate and discussion, the children chose ‘The Coal Barge’ by L.S. Lowry and ‘The Family’ by Bernard Fleetwood-Walker (both in the Potteries Museum), and ‘A Town on Millennium Eve’ by Tim Lloyd (in the Brampton Museum).  These were then put out to allow staff, pupils and parents to vote for their favourite.  Mr. Copestick presented all three of the Council’s choices in Assembly and everyone from Reception to Prep 6 voted.  Thank you to all of the parents who got involved and voted as well!

The clear winner was ‘A Town on Millennium Eve’ by Tim Lloyd (see attached picture) with 52% of the votes.  Staff have already met once to begin planning for the two weeks’ work based around this picture, which will take place in the latter half of this term.  Watch this space in the next newsletter for further details!