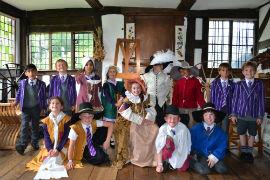 Form 2 had an amazing time at Ford Green Hall. We went to learn all about the Great Fire of London but unfortunately Samuel Pepys’s time portal had broken on the day. It didn’t matter though. Our guide was amazing and answered all of our questions.

We also got extra time to play with old fashioned wooden toys which we really enjoyed. We didn’t realise how much fun we could have with marbles or coins, we could have played for hours and not got bored! We really enjoyed making Petit Fours out of marzipan and we discovered how messy food colouring could be. We also felt and smelled lots of dried foods and learned how in 1666 food would have been preserved without having the modern invention of refrigerators.

One of the highlights of our day was dressing up in old fashioned clothes. We had 2 rich people, 2 middle class people and 2 poor people. The poor people were caught begging in the wrong town without a licence so they were branded with a ‘V’ for Vagrant and then they were put in the stocks. We all got a chance to throw toy fruits at them. It was really good fun. After that we all had the opportunity to dress up and learn a dance that would have been traditional at the time of the Great Fire.

By the end of the day we had learned a lot about 1666 and about Ford Green Hall. We had a brilliant day but we were exhausted. See our Photo Gallery for more photographs from the day.