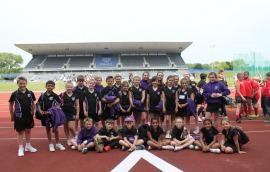 Twenty nine budding athletes from Years 3-6 travelled by coach to the impressive Alexander Stadium in Birmingham to take part in the ISA Junior Athletics Meeting; and what a venue it was! It was used as the training camp for Team USA in the 2012 Olympic Games and only a few days beforehand Mo Farah set a new British record there in the 3000m. It was a very inspiring stadium to compete in, with many of the children running on a proper 400m circular track for the first time.

It was the first time we have taken part in this and we were one of twenty nine schools taking part. We competed in cricket and rounders ball throwing, long jump and shot putt in the field events and 60m,80m,150m,600m and relays in the track events.

Many congratulations to all who took part and also thanks to Mr. Barnes and Miss Machin who spent the whole day time keeping and judging the long jump.

It was a great day for #EPSSport. Click here to see some photographs from our day.