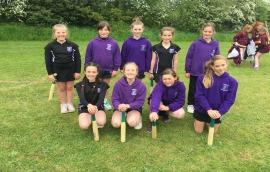 With last week’s match being ‘rained off,’ the girls were looking forward to this week’s match. It was in Uttoxeter against Denstone Prep. School.

Although the weather was rather cold and gloomy, spirits were far from dampened!

From the very start the girls fielded accurately and with determination and this was followed by some very strong batting, where many scored full rounders. It was clear after the first innings that we were in a very good position to win, as we were leading by six and a half rounders to 3.

The great play continued in the second innings where we added another five and a half rounders to bring our total to twelve.

A win for Edenhurst by twelve rounders to six and a half.

Well done to the team!