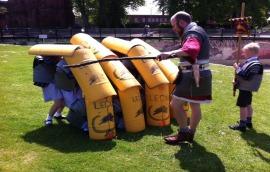 Cross-curricular week is always a time that the children really look forward to, particularly when the topic is ‘The Romans’!

In Science, the children have made a fully operational catapult – luckily it only fires fluffy toys and not boulders! Maths work this week has centred around Roman numerals, including reading and writing the time. The children have also done some shopping using denarius, as the Roman currency was known. Geography lessons have involved finding out about the countries which were part of the Roman Empire, and the children also looked at a map of modern Chester to find signs of the Roman city.

The best part of the week, however, was the trip to Deva (Chester). At the Grosvenor Museum the children took part in some wonderful hands-on activities, from dressing up to grinding spices and sorting archaeological finds.  The march to the amphitheatre under the guidance of a real legionary was the most people’s favourite part of the day! It has to be said, that the legionary was pretty fierce and tough, despite being about 2,000 years old!  Charlie did a fantastic job as Standard Bearer – in fact, the next time that Prep 3 get a little noisy, I’m thinking of calling on him to get them back in line!

Click here to see some photos of Prep 3 at full attention in Chester!