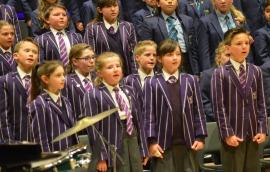 After months of preparation, the very first Bellevue Northern Music Festival took place on Monday 18th April at the Royal Northern College of Music in Manchester.

The festival was a great success, with pupils from all four northern schools – Brabyns, Edenhurst, Forest Prep and Forest Park – showcasing their talents through a range of performances. Amongst many wonderful items scheduled, the audience were wowed by a beautiful choral piece by Lydia Kakabadse, a former Forest Prep School pupil who is now a composer. The programme also included two Samba Bands, a Ukelele Ensemble and a variety of solos.

Collaboration was the name of the game for the programme’s final piece…all four schools had worked together with Edenhurst alumnus James Morris – Mrs. Copestick’s eldest son and himself now a composer – who took lyrical and musical ideas from the children and worked to create ‘Celebration!’, a tremendous massed choral work based on pupils’ ideas following an Able, Gifted & Talented project created specifically for this event.  It was a fitting finale to an evening which both showcased and celebrated the best of music from across our schools.

Susan Wellings, Music Teacher at Forest Preparatory School, was the festival organiser and was delighted to see each school’s dedication and hard work come to musical fruition.

Susan said: “All the pupils across the four schools had worked so hard, over many months, to prepare their performances for the festival. The standard of these performances was extremely high and really did showcase the immense musical talents of our pupils. In addition, it highlighted the very strong and committed music teaching that takes place in the four northern Bellevue schools.

“The feedback from the day has been exceptional, with the school communities absolutely buzzing about the quality and variety of performances, and the wonderful opportunity the festival provided the children. It was a brilliant day that will be remembered for a long time.”

Click here to see photographs of us performing at the RNCM.